Is it true that the bigger SSD system space reservation is better?

The common SSD capacity is 128/120GB, 256/240GB, 512GB/480GB, the former is available for all flash space, and the latter retains nearly 7% capacity as redundant space (or OP reserve space) to improve performance and reliability.

However, the three new products of SSD have original flash capacities of 192GB, 384GB, and 768GB separately, each adopted single 48GB flash memory chip with 4, 8, and 16 cells separately, which means 17% capacity being used as redundant space. Although this approach seems to be wasteful, it can have sufficient guarantee for performance and reliability, according to the official explanation of the manufacturer.

Can you improve the SSD performance by increasing the redundant space or the OP reserve space?

The first layer adopts millesimal system for the nominal capacity, and the NAND particle capacity is in 1024th system. According to algorithm in the above figure, the difference between these two is about 7.37%, so the SSD must be reserved 7.37% of itself. If the SSD has a nominal capacity of 128G, then there will have 9.4G as reserve space with 119G left for available capacity for users.

The existence and the size of the second layer OP depends on the manufacturer's settings. Manufacture will set the SSD according to their own cell quality, master performance, warranty period, or set the SSD based on market positioning. That’s why there are some SSDs have only 112G with a nominal capacity of 128G.

The third layer OP is allocated by the user in daily use. The user may not fulfill all the SSD capacity when he or she allocates in the first time, and leave some non-partitioned space for the OP.

Now I believe there are many readers have come to realize what I am going to say next. We can’t intervene the first and second-layer OP reserve space as it is up to the manufacturers who will consider how to deal with OP reserve space. Nevertheless, the OP reserve space of the third layer can be modified, so it is likely to manually set the SSD reserve space.

Here I used “optimize” instead of “improve”. Why? Because the size of the reserve space affects the performance of the SSD in terms of the read/write speed. So if you evaluate it from these two factors, it basically make no sense. Changes on stability and life of the SSD are the most direct and effective after enlarging the reserve space. 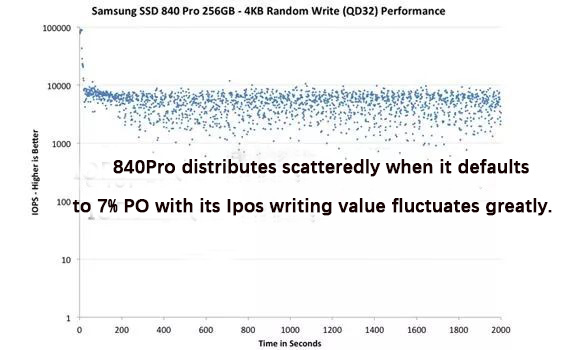 The same images appeared in the tests of the other two brands, which proves that the SSD stability is improved as the OP reserve space enlarges. Moreover, many media and players have repeatedly verified that it has the most obvious influence on the overall performance improvement when 25% of SSD OP is the reserve space.

In addition, the more space reserved for the SSD OP, the higher the garbage collection rate is, which means that the SSD will have longer life.

At last, let we talk about cost performance

Should we just start talking about how to change the OP reserve space since there are so many advantages to have OP reserve space? First of all, what we all need to know that this topic has close relationship with cost performance.

Look at the calculation method, the capacity you cut off is still quite large since the percentage of reserve space here is "actual capacity - user capacity". For those who decide to give up the SSD capacity in exchange for performance, you can look at the setup software of these SSDs, for instance, Toshiba Storage Utilities toolbox software can adjust the OP reserve space: there are six pre-set grades, starting from 5%, 10%, 15%, 20%, 25%, 30%.

Of course, not all brands provide settings of adjusting the OP reserve space.