Why SSDs with different capacity have different speeds?

Do you have any questions when choosing an SSD? Would SSD affect the speed when the brand, interface, computer configuration and other conditions are the same? Would it be better to choose a larger SSD?

These questions will be answered for you one by one.

If you want to understand their relationship, first you need to know what the speed of the SSD is based on.

What determines the speed of the SSD?

The main control chip is the brain of the SSD. Its role is to properly allocate the load of data on each flash memory chip, and to undertake the entire data transfer, connect the flash memory chip and the external SATA interface. Abilities of different masters differ greatly. There are great differences in data processing capabilities, algorithms, and read and write control of flash chips, which directly lead to dozens of times difference of SSD products performance.

Through paralleling cells, the SSD can read and write simultaneously with a fast speed. The number of parallel cells is the channel number. Therefore, more channels will make better performance.

Currently, there are four types of SSD, namely SLC, MLC, TLC, QLC, which are various in reading and writing speed, as well as disk’s life.

Single-Level Cell (SLC) is a single-layer electronic structure with each cell storing 1 bit of data, reaching 1 bit/cell. Its voltage changes slightly, and the P/E has relatively long life, with a theoretical erasing of over 100,000 times when data is written. SLC, however, is mostly used in high-end products of enterprise-level due to the high cost.

Multi-Level Cell (MLC) uses two-layer electronic structure with different high and low voltages, reaching 2bit/cell. Its P/E life is relatively long with theoretical erasing ranging from 3000 to 5000 times. MLC is mostly used in high-end products of household-level as it is accepted by the consumption level despite its high cost.

Trinary-Level Cell (TLC) is called Trinary-Level Cell is a three-layer memory cell. It is an extension of MLC flash memory, registering 3bit/cell. The TLC reaches 3bit/cell. It is the mainstream flash memory on the current market because its capacity is 1.5 times as larger as that of MLC due to the high memory density, the cost is low, the P/E life is short, and the theoretical erasing ranging from 1000 to 3000 times.vvvvvv

Quad-Level Cell (QLC) is a four-layer memory cell which has higher storage density and lower cost than that of TLC. QLC can make larger capacity with lower cost while it has P/E with a shorter life and a theoretical erasing of only 150 times.

SLC is characterized by high cost, small capacity and high speed, while MLC by large capacity and low cost, but slow speed. Each unit of the MLC is 2 bits, which is twice as large as the SLC. Errors in MLC must be corrected because there are many data stored in each MLC unit and its structure is relatively complicated, which increases the error probability. However, error correction makes its performance lag behind simple-structured SLC flash memory. 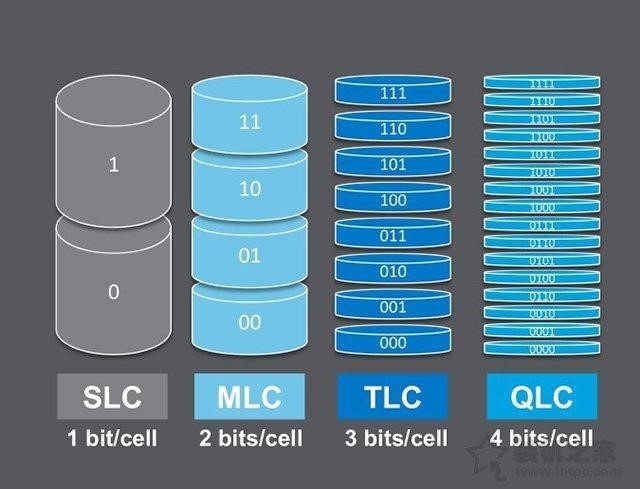 The Relationship between Capacity and Speed

There is a certain relationship between capacity and performance of SSD. Generally speaking, the larger the SSD capacity is, the better the IPOS performance is, and the faster SSD can read and write.

Large-capacity SSD has more cells which mean more channels, so data can be processed faster in per unit of time. Therefore, the larger the capacity of the SSD is, the faster it can read and write.

In fact, the difference between performance and speed is quite small in our daily life. We nearly notice the gap and change. So, it is recommended to choose the appropriate capacity SSD according to your situation.

Other advantages of high-capacity SSD

In addition to the advantages of capacity and performance, a large-capacity SSD has a long life.

Each flash memory of SSD has an erase life called P/E number. For example, P/E is counted only when a hard disk has a capacity of 120G. When compared with the SSD of 1TB, its capacity will be several times as larger as 120G, that is to say, the capacity of 1TB will enjoy longer life than SSD with less capacity if users have the same amount of write.

You need to know what the speed of the SSD is based on first if you want to understand the relationship between different factors,

The SSD with a large capacity determines its price which is very important though it has some advantages. So, you need to choose the SSD that suits you.

From the current price, performance and capacity, it is recommended to purchase 250G SSD for daily use. If you have needs to play some large games or even you have needs in work, you can choose a SSD with larger capacity according to the situation, such as SSD above 1tb. Is very important to choose an SSD that is trustworthy, and a combination of advantages!