NAND flash memory prices have been falling since early 2018, because original 64-layer 3D NAND flash memory has a large growth and smartphone demand reduction, which results in a slump of SSD prices. SSD costs $0.15 per GB at present, while some products even reach an amazing low price, $0.09 per GB, so it is usual that 1TB M.2 hard disk costs within a thousand. NAND flash memory prices are predicted to reduce by 50% in 2019 by research institution. However, NAND flash memory prices will rise in May said by chairman of Phison, Pan Jiancheng. Because manufacturers are out of stock thgether with production reduction of original factories including Samsung, Western Digital and Micron, situation of supply and demand will change. 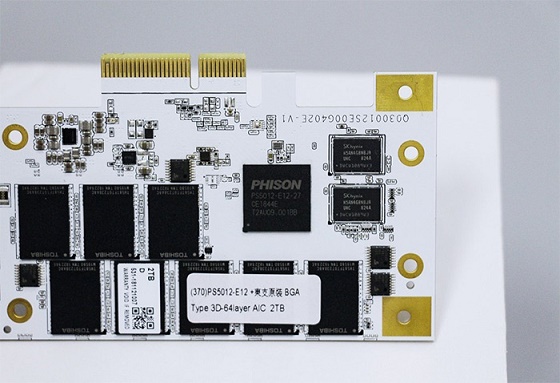 According to chairman of Phison, Pan Jiancheng, many system vendors and channel vendors worry about price reduction expanding due to increasing original manufacturers’ yield. In addition, because of factors such as heated Sino-US trade war, stocks of second half year are very conservative. However, new products will be launched to guarantee performance this year, together with companies such as Western Digital, Samsung, Micron and Intel reducing their NAND capacity, which results in system vendors begin stocking up.

The stocking exceeds his expectation said by Pan Jiancheng, which will be largely fouced in Q2 this year. Manufacturers will concentrate on summer vacation time, so NAND flash memory prices will bound back for the first time of last two years, if interference of Sino-US trade war reduces.

Phison produces more than 36 million SSD master controls and modules in last year, which increases by 56.9% compared with a year before. Financial results of Jannuary this year surges with 4.5 million chips. Whole year shipments are able to reach 50 million chips said by Pan Jiancheng, who is optimistic for this year to Phison.

As upstream suppliers of NAND market(Phison has Toshiba as its NAND supplier with its own master control). Phison sends a message of NAND prices rising, which is defferent from prediction of third party. According to 2019 NAND flash report released by DRAMeXchange, 2018 supply of NAND Flash exceeds demand all year round, what’s more, demand of laptop, smartphone and server still has a poor performance, so exceeded capacity is predicted to last. In this case, suppliers will further reduce capital expenditure to slow pace of expanding capacity, in order to ease tense of exceeded bit growth.

According to DRAMeXchange, there still won’t be enough demand in high season when average NAND Flash prices drop may expand to 50% with a half cut.

Being halved in value since 2018, 1TB SSD prices will keep falling

Samsung releases its 2018 Q4 financial report: net profit is 36% while glory days of mobile phone and memory are over