OLC SSD has been on the market for some time

Now the mainstream SSDs are TLC NAND flash on the market. Compared to the previous SLC and MLC NAND flash，it will be much worse in the write times and stability. But the advantage is that SSD capacity can be larger and price is also more affordable. In order to popularize SSD, upstream flash manufacturers further developed QLC NAND flash, which is 4bits Cell and the density of electrical signal storage is much higher than TLC NAND flash. Correspondingly, the price of QLC SSD with same capacity will be further lower and writing times will be further reduced. So many people regard QLC SSD as a bad product because they think it is reliable and will be out of work quickly. But now those who feel that QLC is not reliable may be a bit out, now PLC SSD with lower wiping times are coming.

QLC NAND flash is rapidly going into the market since last year, but the evaluation of QLC flash is not high. QLC NAND flash original write speed is actually only 80MB/s, which is Inferior to HDD hard disk (but random read and write speed of QLC SSD is still better).

But 3D QLC NAND flash is completely different in reliability compared with 2D TLC, QLC NAND flash. P/E lifespan is not a problem and the existing lifespan of it is longer than the overall lifespan of the computer. That means your SSD is not necessarily broken if your computer is broken, so you don't worry about its lifespan. QLC SSD will have larger capacity and even up to 10TB in future, which is probably replace HDD. QLC SSD can surpass HDD in continuous performance and random performance as well as in power consumption and noise. As production expands, QLC Flash will sooner or later be one of the mainstream productions.

In fact, what is more important component is the controller than NAND flash. SLC is not a good choice for consumers on a tight budget because it is too expensive and capacity is not large. In the design of NAND flash memory, NAND flash memory relies on 0 and 1 for data filling. If you want to write new data on NAND flash memory, you can only erase the whole page and then write new data. And repeatable erasable ability means that the design capacity is fully used, which is a one-time erasable. For example, the design capacity of 1TB SSD, if all data exchange reaches 1TB, then SSD counts it as a repeatable erase. SSD controller is a kind of embedded microchip, whose function is like the CPU command center. It issues all operation requests of firmware algorithm from actually reading and writing data to performing garbage collection and consumption balance algorithm, in order to ensure the speed and orderliness of SSD. Therefore, the controller is the brain center of SSD. 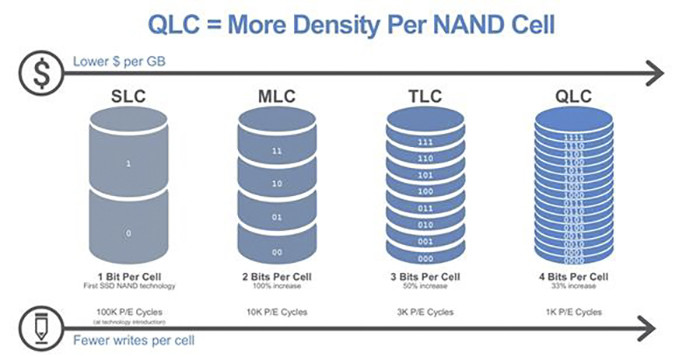 On September 19th, the China Flash Market Summit was held as scheduled and 5bits Cell SSD flash were displayed, which is PLC flash. This also means that PLC flash memory is beginning to emerge.


This means SSD capacity is larger and cheaper PLC SSD is already on the way. The mechanical hard drive may be out of date this time. In addition, the summit showcased the development of stack technology. With more SSDs using 96-layer stack flash coming out recently, the SSD stacking capable of exceeding 100 layers by 2020.


In addition to flash, the big thing about the SSD industry recently is that the PCIe 4.0 platform is starting to be rolled out in the consumer market, so it is no longer limited by PCIe 3.0 bandwidth and faster and stronger SSDs are also beginning to appear. PCIe 4.0 SSD is really strong in performance.


But PCIe 4.0 SSD has a disadvantage that the current price is unusually high, 1TB PCIe 4.0 SSD cost $300 to $450. The good news is the PCIe 4.0 SSD with 4D 96-layer stacking flash will soon appear, which is a strong combination reducing the price of PCIe 4.0 SSD and making it more affordably.

The new technology presented at the summit is also aimed to make SSD more popular, and it is possible that SSD prices will be consistent with that of HDD in the future. In fact, we do not have to be afraid of PLC, PLC\QLC flash was apparently born to replace mechanical hard drives, not to eliminate TLC SSDS from the market.

Maybe one day PLC SSD is going to be on the market. Although QLC flash performance is not comparable to HDD hard drives, it can be improved by a variety of caching technologies. PLC SSD now also does not have the actual specifications and performance.

We can trust the quality of QLC SSD